I drove home from our first date in silence. If I was being honest, I expected to be giddy after such a great date, ready to listen to the radio and sing along to a Taylor Swift song at the top of my lungs. But I was too consumed with confusion to bop along to the radio like I usually did. So the ride home was long and silent.

Although I left my phone on all night just in case he texted to say he had had a great time, it was also silent.

And Saturday, all day, also completely silent… no call, no text, no nothing.

Had I misunderstood? Why hadn’t he said anything? Had I gotten my hopes up too soon? I spent the day milling around, trying to find things to do that didn’t involve checking my phone every 30 seconds. I wondered when I had become this girl? I didn’t obsess and wait around for guys…But this wasn’t just some guy. But I started to think that maybe I was just “some girl” to him…

On Sunday morning, which happened Father’s Day, I put on my coffee-bean printed dress and brown wedges and went to church with my sister Rachel and my brother Stephen. We sat in the front row with our mom, but I have to admit that I have no idea what the sermon was about. I spent the majority of the time shifting my eyes to the right, trying to scope out his family’s row with my peripheral vision.

A flash of purple… It had to be him. (I mean, how many men in Clovis wear purple?)

For the rest of the service, I hoped that my hair was still voluminous and tried to think of ways to refresh my lip-gloss without too many people wondering why I would possibly need to re-apply it during church.

Finally, the service was over and it was time to see if the silence would be broken. I pulled my sister out the door as quickly as possible so that we could get the prime location on the plaza so that Jacob could not escape without at least saying hi. Just as Rachel was about to call me a freak for rushing her outside, he walked up.

“Hey guys!” he said as he gave each of us a side-hug (I hate those. They are worse than a frail handshake). The three of us made small talk for a few minutes and then he left. Even though we had spoken, I still felt the silence lingering.

Why hadn’t he mentioned our date, or even just the fact that we had hung out? Maybe it was because he never thought of it as a date. Or, maybe he was too embarrassed to talk about it in front of my sister (who he had taken to prom in high school… but that’s a story for another time). Or, maybe he just hated me because I talked too much and laughed too loud and acted like a ridiculous school girl with a crush. And maybe I had let my feelings run away with me too soon.

When we got in the car, I got the answer to my doubts in the form of a text: 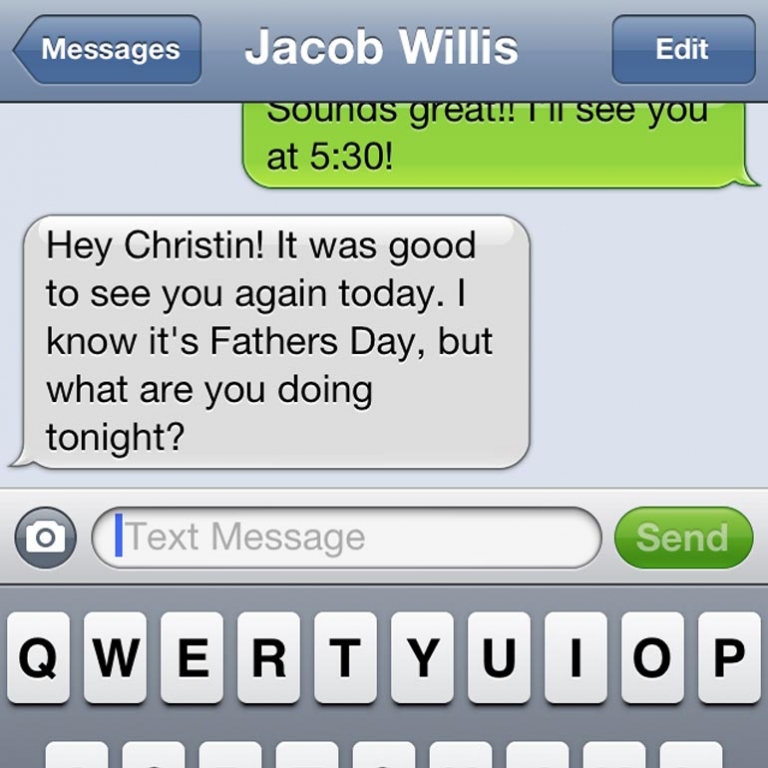 Finally, the silence had truly been broken.

« The First Date
The Family Affair »